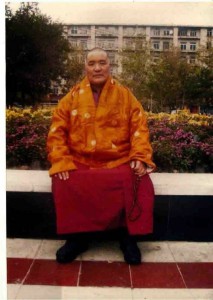 At the age of five, Nangwa Tulku Pema Tekchok Dorje Rinpoche was chosen as an incarnate lama and was installed on his throne. He studied with Khenpo Rangshang as his teacher. After that, Nangwa Tulku Rinpoche accumulated the Bumnga [the “five hundred thousand fold” preliminary practice]. When he was aged thirteen he experienced many hardships in life due to the dramatic revolutions of 1958. In around 1980 the “dharma door” opened, and he received empowerments and instructions in Ratna Lingpa terma and Namchö terma from Garlung Terchen Rinpoche (a student of Tokden Lodoe Gyaltsen Rinpoche), Pema Dechen Rinpoche and Khalung Yangpa Rinpoche. In 1983 and for a few years after that, Nangwa Tulku Pema Tekchok Dorje received Dzogchen teachings and Jetsun Nyingtik teachings from H.H. Terchen Urgyen Kusum Lingpa and also received all of this master’s own terma teachings, and thus became H.H. Terchen Urgyen Kusum Lingpa’s supreme disciple.

Furthermore, he received many other teachings from H.H. Garwang Nyima and received the root commentary on the four medical doctrinal treatises from Tuden and extensively studied Tibetan medical science. Nangwa Tulku had great knowledge of the meditative and the prophetic and other advanced powers. When he was fifty years old, H.H. Garwang Nyima gave him the responsibility for the Palyul Chadongri monastery symbolized by giving his own hat, the Pema Tongdrol, to Nangwa Tulku. All his life the revered Tulku worked for the sake of all sentient beings and the Buddha’s teachings. 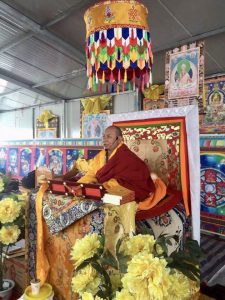 Gar Khentrul Tubten Nyima Rinpoche was born in 1948 in the Achong (Akyong) Gongma tribe. When he was five years old, he started studying with his elder brother Khen Lobsang Tsultrim as his first teacher. From the age of six to ten he learned the Stages of the Path, the Great Commentary on the Way of Entering into the Bodhisattva Path, the Longchen Chö Dun, all of the teachings of Dzogchen, the collected teachings of Dodrubchen Rinpoche, and the biography of Jetsun Milarepa. Moreover, he listened to many other gradual development teachings, completion stage teachings and so forth. Thus, many qualities of the paths and the bhumis became manifested in Gar Khentrul Tubten Nyima’s mind-stream. At the age of eight, Gar Khentrul Tubten Nyima received the Buddhist precepts for laypeople from Lamku Khenpo, a great exponent of the Jonang Longkya Mingyur Dechen Ling monastery. At the age of seventeen he received his monastic vows from his elder brother Khenpo Lobsang Tsultrim. At the age of twenty-five he was fully ordained by H.H. Tulku Garwang Nyima. Based on those individual vows he became a holder of the Pitakas. At the age of thirty-eight, Gar Khentrul, Tubten Nyima achieved the position of khenpo and was installed on the khenpo throne in Palyul Tharthang Monastery. Since he was forty-two until now he has undertaken both khenpo and Vajra Master (vajra-holder) responsibilities at the monastery. 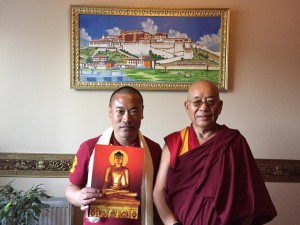 He attended the Namdroling Ngagyur Nyingma Institute (Higher Buddhist Studies & Research Center) in South India. While he was in that Shedra class he studied non-religious knowledge [in general the ten sciences of arts and crafts], the “Great Commentary on the Way of Entering into the Bodhisattva path”, “The three vows”, “Tsejuk Shisum”, the “Root Wisdom”, the “Way of Entering into the Middle Way”, the “Treatise of Four Hundred Verses”, and so forth.  After that he went on to study the typology of the mind, Signs and Reasoning, the Collected Topics and theory of logic in Sera Je monastery in South India. Furthermore, Sera Je monastery distinguished him as an incarnate lama and gave him the position of throne holder.

These days Tulku Lodoe Gyatso Rinpoche lives in Europe, where he studies French and recently founded the Palyul Jamyang Shenrig Puntsok Norling buddhist center in Belgium. The name of the center was graciously accorded by H.H. Garwang Nyima Rinpoche.

Each year he travels to Malaysia to teach dharma to his disciples there. He has been appointed to construct the Shedra in Churong Chadongri monastery at the request of all lamas, tulkus and khenpos there.