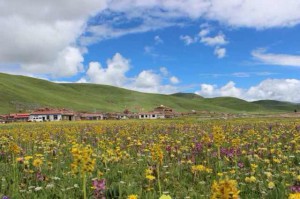 Lodoe Rinpoche is a tulku of the Palyul Chadongri Tashi Yalpel Ling Monastery in Amdo Golok. We will therefore start with a brief introduction to the history of the monastery and the line of succession of its high lamas.

In the first year of the 19th century, the great siddha, Rigzin Do Kyentse Yeshi Dorje was born into the Churong tribe in Amdo Golok (Eastern Tibet). In his early life he studied with many spiritual teachers of non-sectarian philosophical doctrines, and he obtained the manifestation of the paths and the bhumis in his mindstream. He demonstrated several of his supreme siddhi qualities to his disciples. For instance, he was able to fly into the sky like a bird, was able to move rainbows freely with his fingers in any direction, and so on. He became the great siddha of the whole Domed region of Eastern Tibet.

When he was older he founded a tent monastery camp (Wa dra-ngak) among the Churong tribe and started teaching dharma to the communities at the camp both summer and winter. Thus, many eminent disciples from many different places assembled to willingly and freely receive his teaching. Unfortunately, when he was around seventy years old he passed away. His son, Dechen Rikpai Rati Rinpoche (1830-1896) continued to develop the site into a monastery. Gyaltsen Rikpai Rati taught the great Jetsen  (after H.H. Rigzin Jatson Nyingpo) and Longchen Nyintik etc. teachings to the monastic communities. When Rikpai Rati grew old his successor Do Rinpoche Zilnön Gyepai Dorje (1890‐1939)  took responsibility for the monastery for ten years. Then the people of the Churong tribe offered the monastery to Gyalwa Palyul Monastery when Palyul Choktrul Rinpoche Jampel Gyepai Dorje (1894 – 1958/1959) and many other senior Rinpoches of the Gyalwa Palyul Monastery visited them. Thus Palyul Choktrul Rinpoche became the root guru for all householders and monastic communities in the area.

During the period that Palyul Choktrul Rinpoche was giving empowerments, instructions and teachings to the tribal communities, the 1958 period [Great Leap Forward] was coming closer. The atmosphere of disturbance brought great misfortune to the monastery. However, in 1982, the “dharma door” began to open and this offered the right to practice Buddhism according to the wishes of the local people. 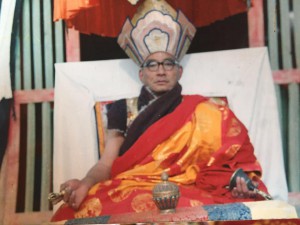 Then Nangwa Tulku Pema Tekchok Dorje spent about 20 million RMB extensively developing the monastery. He restructured the great shrine hall, built a school for young monks and a retreat center in the monastery, prayer wheel houses, stupas, billions of Mani stone inscriptions and so forth. After that Gar Khentul [holding both position of khenpo and tulku] Tubten Nyima was invited to the monastery in order to teach dharma during both the summer and winter teaching periods. His disciples realized that he has the supreme sign of a siddhi. He established a more reliable tradition of discipline for the monastery. Now there are about one hundred and fifty monks in residence.