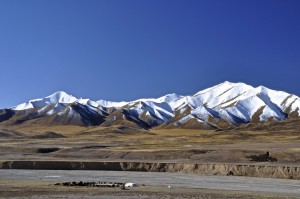 Nomad tents in the foothills of Amnye Machen

Lodoe Gyaltso hails from a modest family in a nomad community living in the foothills of Mount Amnye Machen Pomra  in Golok, near the source of the Yellow River. According to the Ru-mzod (rutho) “bone” or patrilineal clan lineage his family belongs to the eminent Ju clan. Several reincarnations grace his family lineage to serve the communities of Golok and beyond. His grandfather was an important spiritual leader and tulku. Lodoe Rinpoches’ great-uncle Sangye Tulku Shenpen Rinpoche was a cousin to the famous polymath Ju Mipam Rinpoche (1846-1912). Their nomadic family groups came from Dzachuka in Kham.

Two of his uncles at present are recognized rinpoches and his oldest brother, dr. Tsulpo, practices medicine in a small clinic attached to Chadongri Monastery. Dr. Tsulpo also offers well visited meditation classes to the interested lay people of the region. 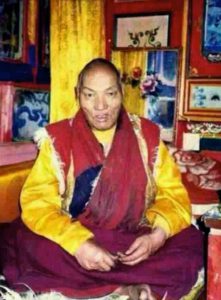 At Lodoe Rinpoches’ birth in 1978 auspicious omens were reported. In 1987 the venerable Tulku Kunsang Namgyal and venerable Nangwa Tulku Pema Thekchok from Palyul Tarthang Monastery and other venerable monks were of one mind and took it upon them to conduct the enthronement at Chadongri Tashi Yalpel Ling Monastery and to recognize him as the sixt Choying Rangdrol Rinpoche. The ceremony was attended by a large religious and lay audience.  At the same time venerable Rigzin Gyaltsen, an exponent of the Nyingma school, was appointed as his tutor. From him Lodoe Gyaltso learned the fundamental subjects and rituals with ease. 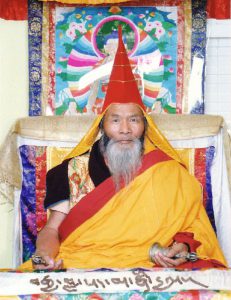 At the end of 1987 he received the Nyingtik Namchö synoptic explanation and practised the preliminary Bumnga exercises under the aegis of Khenchen Ngawang Delek Rabgye from Longkya Pel Ngedon Mingyur Dechen monastery.

When he was 12 years old he took the Sramanera vows from Lama Kelden Gyaltso from Dzamthang Monastery in Sichuan and was able to hear the Kalachakra and other teachings from this master. At age 13, he formally began to attend Longkya Pel Ngedon Mingyur Dechen Monastery. There he paid homage to H.H. Ngawang Pema Namgyal Palzangpo Rinpoche with sincerity and all his heart. It was H.H. Ngawang Pema Namgyal Palzangpo Rinpoche who had accorded him the name Lodoe Gyaltso previously.

From this master he received the threefold training of initiation, transmission and explanation of Dzogchen. Under this master he also practiced the sixfold Kalachakra Sampannakrama (Dzogrim) for 6 years ( i.e. two three year retreats). Furthermore, the realised Akyong Tokden Rinpoche and Khangsar Tulku Tenpé Wangchuk (Tenpo) Rinpoche and others tutored him in Dzogchen, especially the threefold training of initiation, transmission and explanation according to the Nyingma tradition. At the age of 23 he returned to his own monastery and became a highly respected Lama in that area and among those communities.

When he was 29 years old he went on pilgimage to the holy sites of Tibet, Nepal and India. In Tibet Lodoe Rinpoche circumambulated the holy Amnye Machen mountain of his birth region and the three Chenrezig mountains in Yading, Gardze T.A.P. He had the honor to visit Khenpo Jigme Phuntsok’s Larung Gar Monastery and all the great temples and monasteries of Lhasa. Finally he visited Samye Monastery, the first Buddhist monastery in Tibet and the place where Guru Rinpoche summoned the mountain god Machen Pomra and made him a protector of Buddhism. In Nepal he went to see Yang le shod, a sacred cave of Guru Rinpoche.

In India Lodoe Rinpoche went to witness the great places of the Buddha’s life. Among the Tibetan monasteries in India Lodoe Rinpoche paid homage at Sakya Dolma Phodrang, the Gyuto Monastery, residence of H.H. Gyalwa Karmapa, Ngagyur Mindrolling Monastery and so on. After having finished this pilgrimage, he steeped himself in the threefold practice of study, contemplation and meditation of Sutra and Tantra at Sera Jey Monastic University and at Namdroling Ngagyur Nyingma Monastery.

In the autumn of 2014 the great abbot Gar Khentrul Thubten Lungtok Yonten Nyima Rinpoche and the Secretary of Chadongri Monastery put the question of the continuation of the monasteries’ lineage before H.H. Garwang Nyima Rinpoche. His Holiness performed many prayers upon which they unanimously viewed the auspicious close interrelationship between H.H. Garwang Nyima, the Khentrul and Lodoe Rinpoche to be such that the title and rank of abbot would be conferred on Lodoe Rinpoche when the time would come. Therefore they requested Lodoe Rinpoche by telephone to accept the dignity of this position and he assented. The decision was authenticated with the monastery seal. An abbot’s ceremonial great brocade cloak (Zawok Virchen or Za’og Ber chen), a lotus hat and an official letter were sent to him. 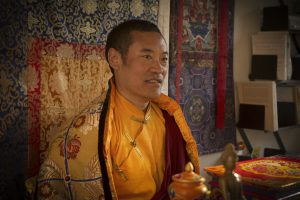 Lodoe Gyaltso Rinpoche is compassionate to all sentient beings and a kindhearted person. Your support of his religious and charitable projects, such as aid to the poor, establishing schools and assistance to monasteries, will be deeply appreciated.