Garwang Nyima Rinpoche, the 3rd Lhatrul of Palyul Tarthang Monastery, graciously conceded to be the patron of our dharma center. It is fitting therefore to offer an abridged biography of this master.

As prophesied in the Sutras (general prophesy) and by several saintly beings, Garwang Nyima Rinpoche was born North of Tarthang Monastery in an eminent family, in the eight Tibetan month of the Iron Tiger Year (1950), at the foot of Minlung Mountain near the great Machu River amidst wonderful signs.

When he reached the age of four, he was recognized by the Palyul Choktrul Rinpoche Choekyi Dawa as identical to the 2nd Lhatrul. When visiting Tarthang Monastery for the first time he recounted various memories of his past life.

He received the esoteric teachings of Namcho, Ratna Lingpa, Jatson Nyima, Karma Lingpa’s Shitro and many others from Palyul Choktrul Rinpoche. Thereafter he was sent to Dodrupchen Monastery, where he received empowerments and pith instructions of Nyingthig Yabshi and Dumnyi from Dodrub Tulku Rigzin Tenpai Gyaltsen, the 3rd Dodrupchen.

Then chaos befell the Land of Snows with vast destruction of Tibet’s rich cultural heritage, the killing of many people among which masters and students, desecration of vows and holy sites and so on.

The Lhatrul Rinpoches’ teacher with several disciples were killed by the Chinese forces, but he himself could hide in the high mountains. Without food but guided by a vision of his master he found his way to a nomad encampment were he lived in the guise of an ordinary child. After two years Garlong Rinpoche, another of his mentors, foresaw that the Lhatrul Rinpoche was still alive and sent Tulku Pema Choejor with a search party to invite him back to Tarthang Monastery.

At that time the Cultural Revolution took its toll and the Lhatrul Rinpoche came to endure scrutiny and torment. He never had the slightest thought of anger or retaliation, showing that he truly is a noble being. Seeing the threat of decline of Buddhism with many practitioners dead and the Vinaya tradition on the verge of extinction, he took the vows of celibacy at the age of twenty-four from the abbot of Arkung, Khenchen Thupten Gyurme Thinley.

Gradually, a little freedom to practice Dharma was granted and the Lhatrul Rinpoche learnt the three basic rituals of monks, followed by the “Preliminary Teachings on the Nyingthig and Namcho Cycle”, “Pith Instruction on Dzogchen View, Meditation and Conduct” from Akyong Khenchen. He also received empowerments, pith instructions and oral transmission of the old and new treasure teachings. Later he studied Tibetan Grammar, “Ascertaining the Three Vows”, the “Paltrul Ngondro”, “Letter to a Friend”, “Guide to the Bodhisattva’s Way of Life”, “Longchenpa’s Seven Treasury” and so on from many accomplished masters such as Getse Khenchen Lobsang Sherab, Any Khenpo Lobsang Tsultrim, Shili Khenpo Tenzin Sangpo.

In addition to these teachings he also received vast and profound Kama and Terma teachings of the Nyingma tradition from Minling Chung Rinpoche, Baso Choeje, Alag Lobsang Dhondup, Gyangkhang Tulku Thupten Palzang, Ogyen Kusum Lingpa and many others to be found in the “List of Teachings Heard” by Lhatrul Rinpoche himself or the “History of the Lineage Holders of Tarthang Monastery”.

In 1981 he was appointed as the eleventh Khenpo of Manyin Gongma Monastery. Here he established the three rituals of monks according to the Minling Dharma Shri tradition, raising the banner of the Vinaya tradition and laying the foundation for the higher teachings and practice. 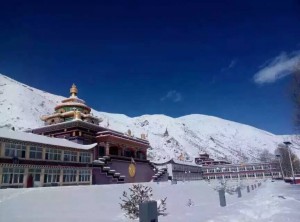 In 1982 he went to Tarthang Monastery and was enthroned as the successor of Choktrul Thupten Choekyi Dawa. Since then, he made tremendous effort for the benefit of beings and the preservation of the teachings. As an object of veneration and the base for the accumulation of merits of sentient beings, he has made contribution to the large-scale constructions of temples, statues and scriptures. Hence restoring with firm determination and tremendous effort that what was destroyed by the invaders.

In Dzogshod H.H. the 10th Panchen Lama bestowed many teachings on him and invited him to Nangten Lobling and Tashi Lhunpo Monastery, however owing to his responsibilities he did not have the opportunity to travel there.

Khenchen Munsel, the lineage holder of the “Osel Nyengyud” or “Clear Light Aural Transmission”, considered him his successor for these teachings and bestowed many common and uncommon teachings and transmissions on him. All aural lineage teachings deriving from Dzogchen Khenpo Ngaga were given to him completely and he received permission to propagate them. 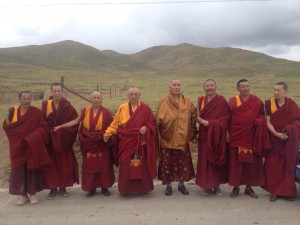 H.H. Garwang Nyima with Gar Khentrul and Nangwa Tulku at a visit to our monastery

Currently the Lhatrul Rinpoche looks after more than one hundred branch monasteries of Tharthang Monastery in the regions of Golok, Gyalrong and Litsang, all of which suffered vast scale destruction during the upheavals of the invasion, the Cultural Revolution and the Great Leap Forward.

The Lhatrul Rinpoche gives novice and full vows to thousands of monks, increasing their numbers. He maintains strict conduct among them. He established the Drubchen and every year the three retreat practices and the empowerments, the instructions and oral transmissions of the distinct Palyul traditional teachings are taught at the two retreat centers. In between the Drubchens the Kama and Terma teachings are given.

Because of the Bodhisattva’s Practices in his previous lives he is compassionate to all beings and particularly to the downtrodden. He takes special care of them in providing food, shelter and privileged access to Buddhist teachings.

Throughout his life miraculous events and visions have accompanied him, often witnessed by his disciples as well.

This very abridged biography is based on the official work written by Khen Rinpoche Ogyen Tsondue, an eminent student of the Lhatrul Rinpoche.