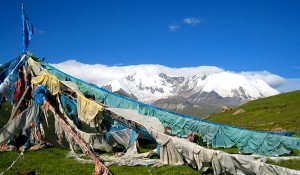 Amnye Machen with Latse, a communal offering to the mountain deity. Usually placed along high peaks that border mountain passes they are important culturally and historically.

Amnye Machen. “A mountain that stands beside a bend in the Yellow River in the Chinese province of Qinghai (which Tibetans call the Amdo region), the seat of the Tibetan mountain god Machen Pomra. This mountain is an important pilgrimage site in northeastern Tibet” (source: The Princeton Dictionary of Buddhism). The mountain range of Amnye Machen in Amdo Golok rises to 6.826 meters. The guardian of the teachings Machen Pomra resides here in a palace made of precious stones. He is head of the Sadaks (Lords of the Ground) of the region and many consider him the senior regional godhead of Tibet. Machen Pomra vowed to protect the Buddhist teachings several times, first before the Buddha Vajradhara, then before Guru Rinpoche and afterwards before Je Tsongkhapa – himself a native of Amdo. Machen Pomra is therefore also one of the protectors of the Ganden Monastery. 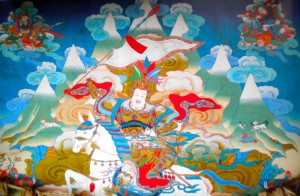 Machen Pomra is clothed in the attire of ancient warriors and carries weapons to combat enemies of Buddhist teachings. He also has a wish fulfilling jewel with him. Many epic poems from Golok celebrate the mountain and its guardian.

Machen Pomra is the protector of Chadongri Monastery and the communities of Golok. A pilgrimage or Khora around his abode takes a week on foot and it is said that 10.000 people a year undertook the Khora in olden times. The great yogin from Amdo,  Shabkar Tsokdruk Rangdrol (1781-1851) stayed at the mountain and his cave there is visited by many pilgrims.

Machen or Magyal Pomra is “a powerful protector of the Dharma who, after having been subjugated by Guru Padmasambhava, became a Bodhisattva of the tenth spiritual level (bhumi)” (source: The Life of Shabkar, the Autobiography of a Tibetan Yogin). 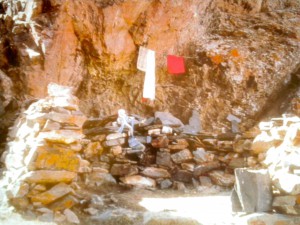